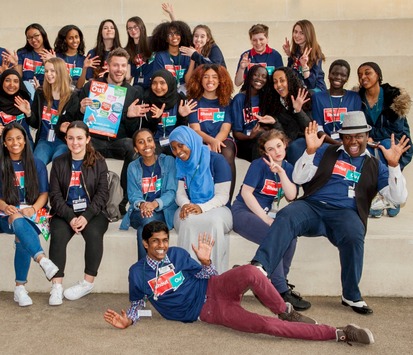 On 7 April Camden's Youth Council and I held our annual Shout Out Event at UCL Academy. The event was a huge success with a good turn-out of young people attending and a great team of volunteers helping throughout the day.

For the volunteers, the event began at 10am with breakfast and a brief of the day. We started getting the building ready, preparing name tags and welcoming stallholders, with a short break for lunch.

At 2.30pm Shout Out was opened to the youth of Camden, who were invited upstairs to explore the interactive stalls on topics ranging from Camden's new youth base (recently named ‘The Hive’) to sexual health and relationships.

At 3pm the event was officially opened by our host, young person Sulekha Farah, introducing the three opening speakers - me (Hannah Morris, Camden Youth MP), Sarah Hayward, Leader of the Council, and Suli Breaks, an inspirational spoken word artist, and a performance by another young person, Jordan Peterson.

We also announced the two competitions running that day - a 'What Camden Means to Me' photo competition and a prize draw for those who completed their evaluation forms.

Next it was time for the workshops! Participants could attend two out of a choice of eight: votes at 16, youth homelessness, the living wage, healthy relationships, employment, gangs, body image and Camden's future services for young people.

Each workshop featured debates, discussions, the eating of lots of fruit and decisions on what we would change or act on after the session, what the Youth Council would aim to achieve and what Camden Council would do. This list has been received and collated and the Youth Council have now got their work cut out, with a plan to report back on progress at the next Shout Out.

The event had an additional target of highlighting the importance of voting and encouraging eligible young people to register to vote by 20 April. The event finished with a rousing speech by TV presenter and author Rick Edwards on this subject and then, of course, lots of selfies and dinner.

It was shown at the event how interested young people are in politics and the world around them and all they need is to know the services available to them.

Camden's next Shout Out will include hustings for the new Youth MP and we cannot emphasise enough the importance of getting involved, having your say and voting in the 2016 Youth MP elections. This young person (and the two Deputy Youth MPs) will represent your views and help ensure that Camden Council and other public bodies listen to the voices of local young people.

National and local politicians and decision-makers won’t value our ideas and opinions if we don't have our say in elections. We need to fight together for votes at 16 and make our voices heard, as the changes made in Parliament now will affect us in the future. If you can, vote; if you can't, fight to have that changed.