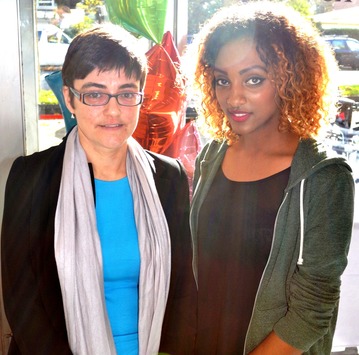 Children and young people who are looked after by the Council were at London Zoo this week to have their musical, sporting and school achievements officially recognised at an awards ceremony.

Before visiting the lions, tigers and other animals at the zoo, the children were presented with Achievement Awards by the Mayor of Camden.

Cllr Hayward said: “This is a great example of how young people across Camden are achieving amazing things and overcoming significant barriers to reach their potential. Children and young people in care face challenges which other young people do not encounter – but your successes in the face of adversity will stand you in very good stead for the future. I would also like to thank the foster carers who give you such tremendous support and the Council staff who work tirelessly on your behalf.”

Leader of the Council, Cllr Sarah Hayward, pictured with Tsion (right), from the Children in Care Council.

Councillor Hayward also met members of the Camden’s Children in Care Council (including Tsion, pictured with Cllr Hayward), who give feedback on services for looked-after children and get involved in shaping decisions which affect local young people who are in care or leaving care.

The Mayor of Camden, Councillor Lazzaro Pietragnoli, said: “Thank you for your amazing achievements. You have all made your foster carers, headteachers, Camden councillors and staff very proud.”

Among the other guests at the event on Monday (27 October) were Camden’s longest-serving foster carers, John and Moira Doneo, who have been caring for the borough’s looked-after children for 50 years; Camden’s Cabinet Member for Children, Councillor Angela Mason CBE; Cabinet Member for Young People, Councillor Georgia Gould, and Camden’s Director of Children, Schools and Families, Martin Pratt.