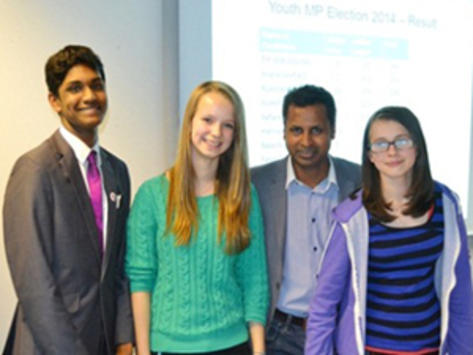 Camden’s young people have elected their own Youth MP – with a record 2,533 voting this year.

Young people took to the polls in their schools, youth centres and online to vote for someone to champion the views of young people across Camden, London and the UK. The record turn-out was an impressive 17% of the Camden youth electorate. The results were announced on Thursday (3 April) by the outgoing Youth MP for 2012-14, Jabeen Rizvi.

The successful candidates in the 2014 Youth MP election were:

They will all serve a two-year term of office, until the next Camden Youth MP election in 2016.

Hannah said: “Thank you to all my friends who supported my campaign. I will work hard to help make Camden as good as it possibly can be.”

Councillor Nasim Ali OBE, Cabinet Member for Young People, said: “Congratulations to Hannah, Shahel and Sarah, who worked really hard to win so many young people’s votes. They have a great opportunity to represent all young people in Camden and to work with us and other organisations, such as the police and health services, to help make this borough a better place for young people to live and grow up in.

“Thank you too to Jabeen Rizvi for being such an inspirational Youth MP for the last two years. You all have a really strong foundation to build on.”

The newly-elected Young MP and Deputy Young MPs will: